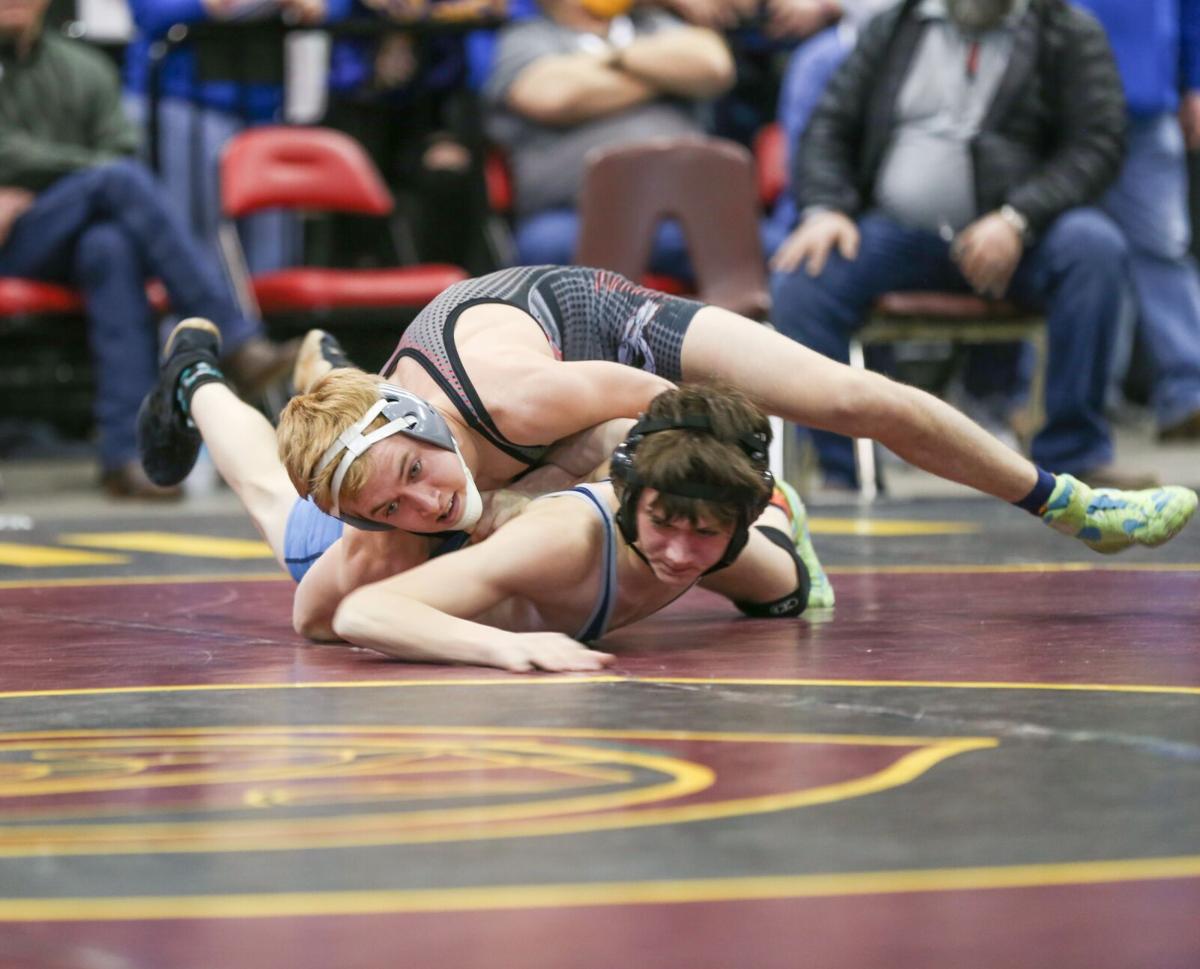 Clearwater Valley’s Landon Olsen (120) went 3-2 on the day and won a 6-2 decision over Ririe’s Brian Ferguson to claim fifth place at the state wrestling tournament held last Saturday at the Idaho Center in Nampa. 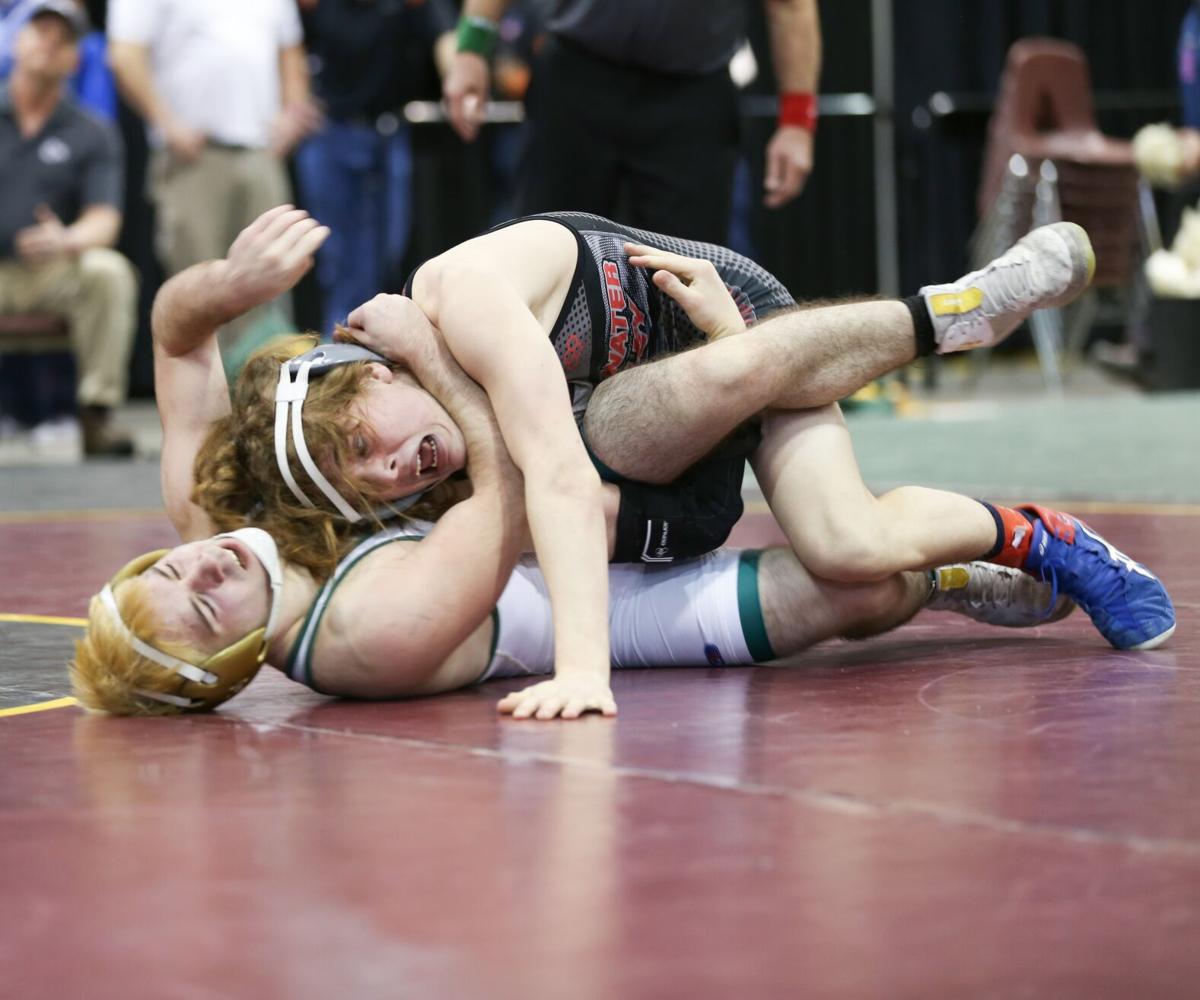 Clearwater Valley’s Daring Cross posted the top finish out of all the locals who competed at the 2A state wrestling tournament last Saturday, Feb. 27. He went 4-1 in the 138 weight bracket, including a pin of St. Maries’ Sam Martin during the pictured third place match. 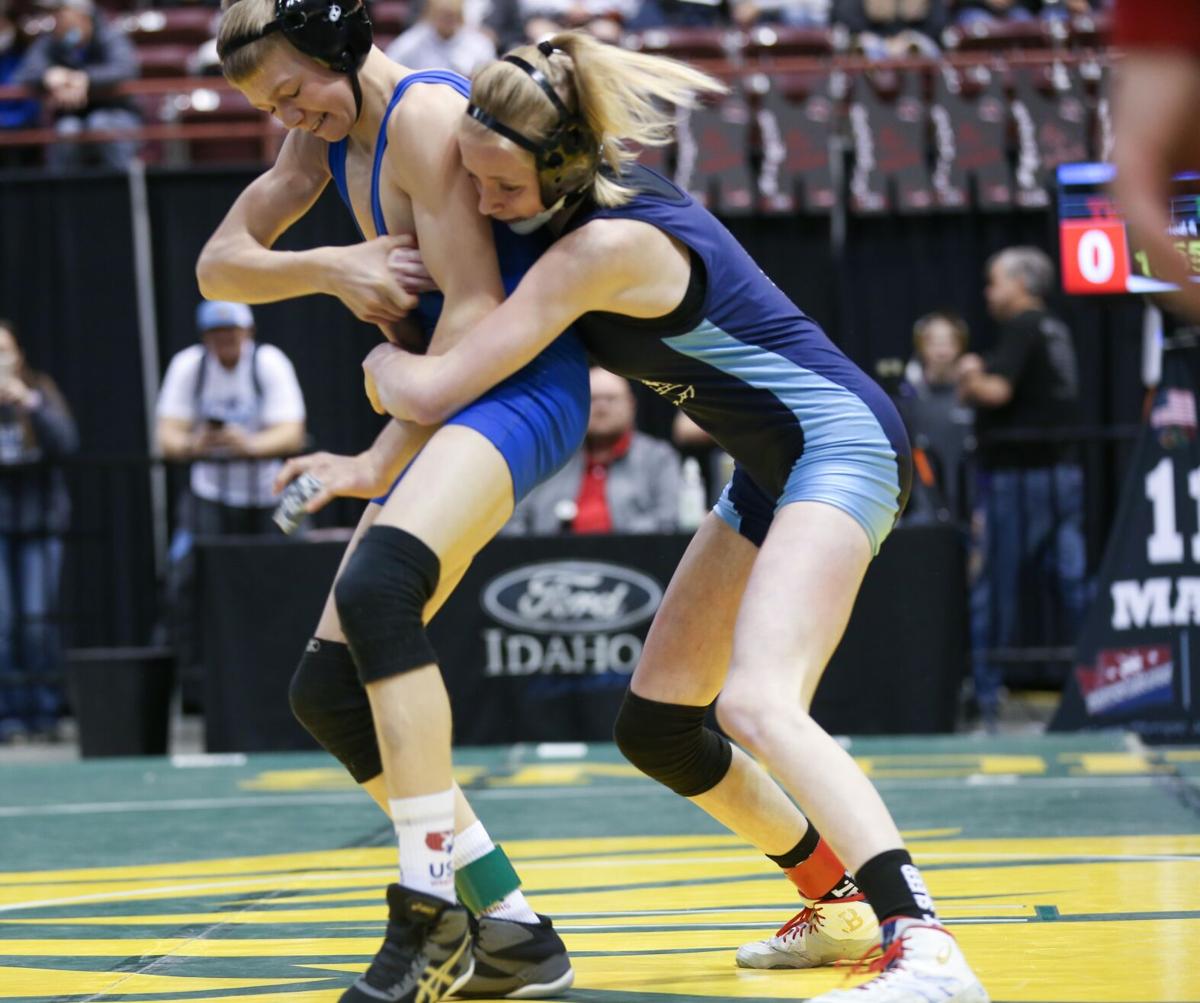 Clearwater Valley’s Landon Olsen (120) went 3-2 on the day and won a 6-2 decision over Ririe’s Brian Ferguson to claim fifth place at the state wrestling tournament held last Saturday at the Idaho Center in Nampa.

Clearwater Valley’s Daring Cross posted the top finish out of all the locals who competed at the 2A state wrestling tournament last Saturday, Feb. 27. He went 4-1 in the 138 weight bracket, including a pin of St. Maries’ Sam Martin during the pictured third place match.

Clearwater Valley’s Daring Cross (138), CV’s Landon Olsen (120) and Highland’s Kadence Beck (106) medaled at the 2A state wrestling tournament held last Saturday, Feb. 27, at the Ford Idaho Center in Nampa. Cross pinned Sam Martin of St. Maries to claim third place, Olsen won a 6-2 decision over Ririe’s Brian Ferguson to take fifth, and Beck took sixth place and became the fourth and final female to medal at the event that gathers the best of the best from across the state.

Cross’s only loss was to the wrestler who ended up winning the title.

“Daring said to me, ‘I wish I was in the other side of the bracket, I’d like to have a shot at him [Declo’s AV Marino, who placed second] to really know how things would turn out,’” CV/K coach Carlos Martinez said. “But that’s just how it works out. Sometimes you see No. 1 and you don’t get a chance to see how it would go against No. 2.”

Cross beat Declo’s Nathan Gerratt and Firth’s Dustin Bartausky to reach the semifinal, in which he fell to Grace’s Rhet Jorgensen. Cross then won his consolation semifinal against Marsing’s Troy Miller to reach the third place match.

Olsen reached his semifinal by way of wins over West Jefferson’s Kameron Sauer and Ririe’s Brian Ferguson. He fell to Malad’s Ben Wray in the semifinal, then fell to Declo’s Dax Blackmon in the consolation semifinal, setting up his rematch with Ferguson for the medal. During his first match with Ferguson, Olsen won a 10-1 major decision.

“As a senior, Landon wrestled a great tournament,” Martinez said. “He was seeded No. 4, but all the top six in that 120 weight class were good. Landon has never had a great seed at state. He has always been drawn in against the No. 1 right off the bat, first round. At No. 4, he had a chance to wrestle and a chance to earn a medal, and he did great.”

Martinez was also happy to see Beck land a medal. “That was cool,” he said, “and as a sophomore, she’ll go on and dominate the girls tournament every year. That was a big win for her in a tough bracket.”

Beck went 2-3 on the day, which she began with pins against Aberdeen’s Santiago Nava and Tri-Valley’s Russell Noah to reach the semifinal. Grace’s Hans Newby pinned her in the semifinal, North Fremont’s Cruz Estrada pinned her in the consolation semifinal and West Side’s Jed Hurren won the fifth place match with a 10-2 major decision.

Tournament organizers condensed what has typically been an all-classifications multi-day event to one day for the bigger schools last Friday, Feb. 26, and one day for the smaller schools — which made the situation more difficult than usual for all the wrestlers. Beck’s five-match day, for instance, began shortly after 9 a.m. MT and her last match wrapped up at about 4:30 p.m. MT.

“This year, with covid restrictions and everything else, they split it up and went to a one-day event, and man, that takes a toll and you could see it on the kids,” GHS coach Andrew Beck said. “I think we’d have had a different outcome if we’d had a two-day event. ... I’m just super proud of all of them. They worked hard. It’s a long season, and with covid and all the restrictions, we didn’t know what the season was going to bring. I’m glad to see that the 12 kids that started the season finished the season, and finished strong. They stuck it out, worked through injuries, worked through everything else, and finished the season strong.”

Beck and Prairie’s Holli Schumacher (113) were both among the 12 who trained with Grangeville this season; Schumacher went 0-2 against wrestlers out of Wendell and Firth.

In all, seven CV boys competed at the state tournament, as did three of Kamiah and six of Grangeville.

“I’m super proud of all of them,” Martinez said. “Normally, we go to the state tournament and the kids have 50 or 60 matches under their belt, and this year, they had half that number. The experience they gained was half of what it was in a normal year. This has been a weird year, so for the kids go down there and wrestle the way they did was good. We’re a young, inexperienced bunch, for the most part, and these kids wrestled above their potential. We didn’t bring home a ton of medals, but these kids shocked me with how well they did.”

CV’s Anthony Fabbi (126) won in the opening round, lost in the second round, won one consolation round match and fell to Aberdeen’s Hiatt Beck.