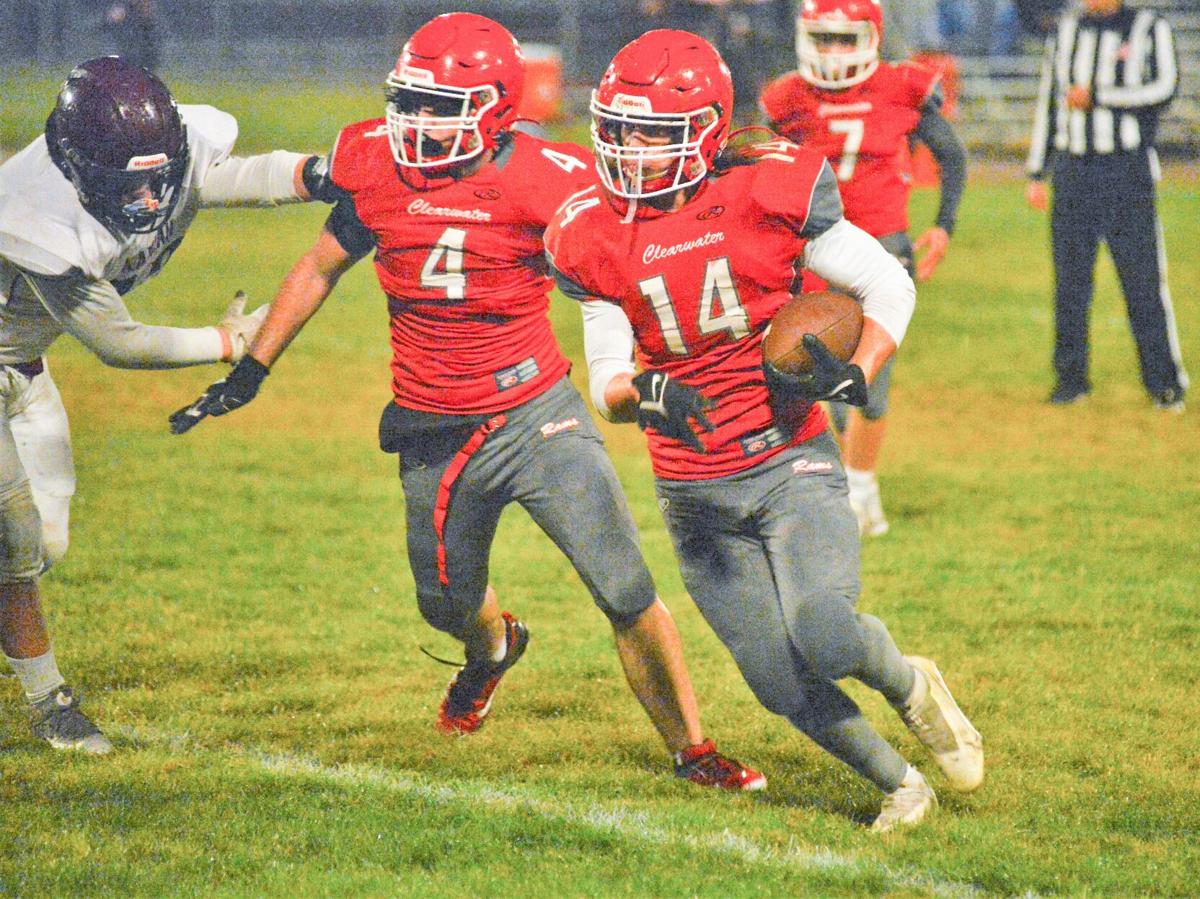 Early in their rivalry game against Kamiah last Friday night, Oct. 22, the Clearwater Valley football boys pulled ahead 8-6 after a touchdown run by Dylan Pickering (14). 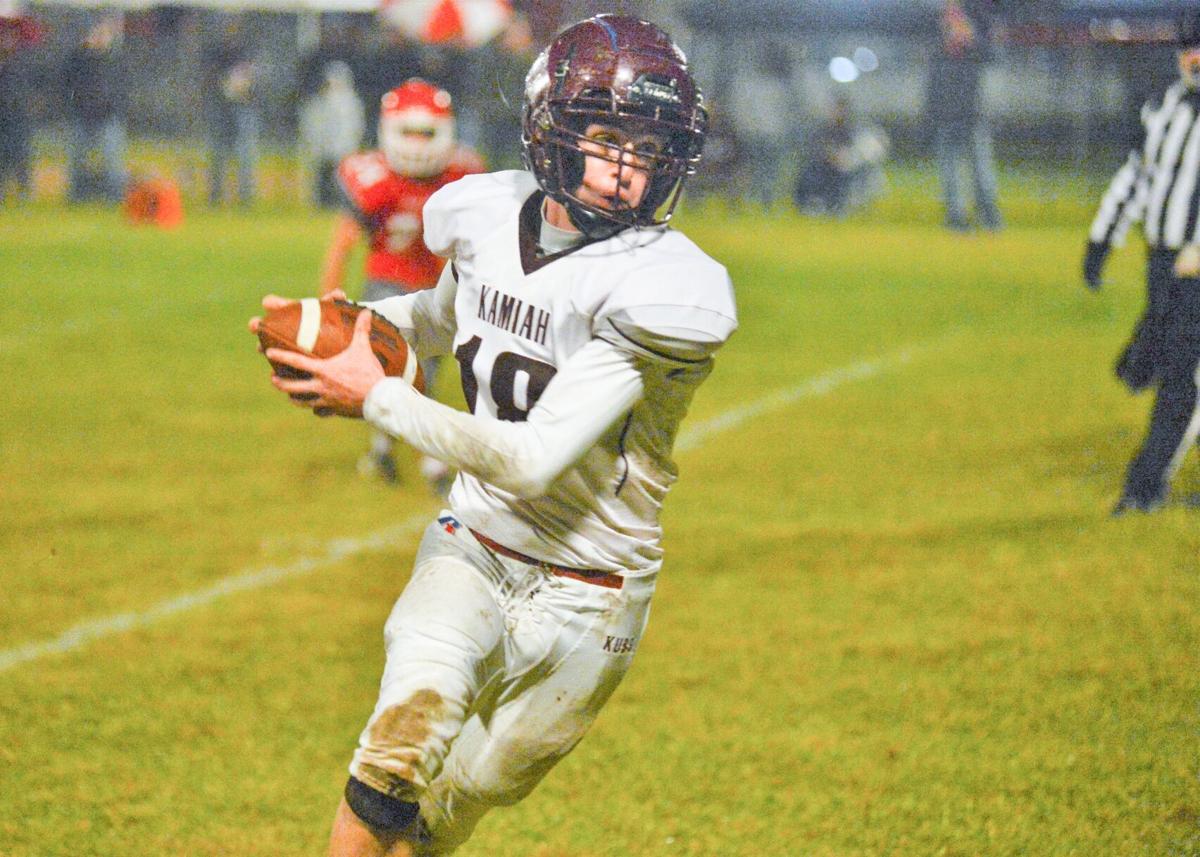 Kamiah’s Brady Cox scored two receiving touchdowns, which put the Kubs ahead 12-8 before halftime, but during the fourth quarter, Fabbi threw a touchdown pass to Anthony Carter (not pictured) for the winning points. 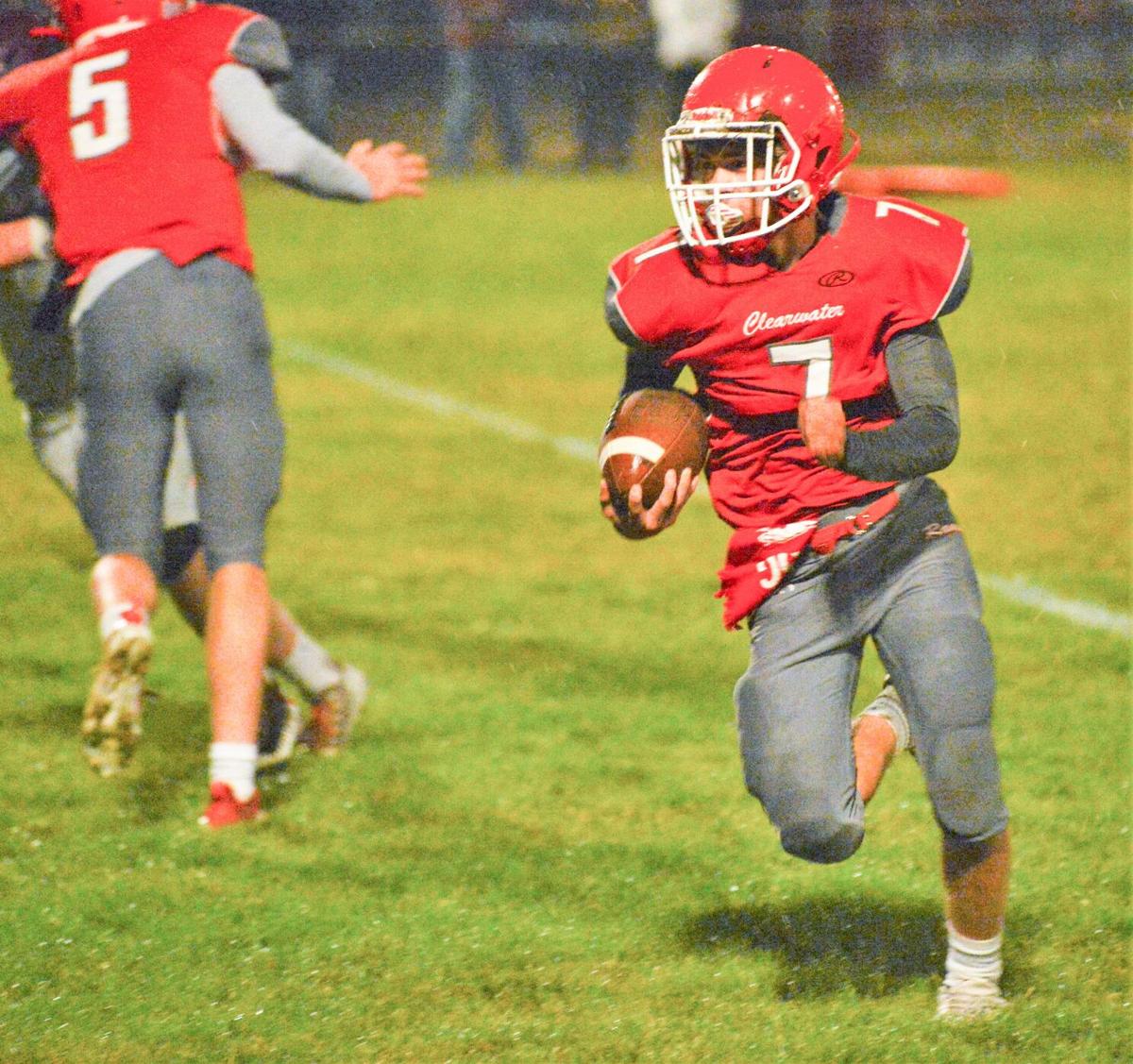 Anthony Fabbi (7) got a two-point conversion during the game.

Early in their rivalry game against Kamiah last Friday night, Oct. 22, the Clearwater Valley football boys pulled ahead 8-6 after a touchdown run by Dylan Pickering (14).

Kamiah’s Brady Cox scored two receiving touchdowns, which put the Kubs ahead 12-8 before halftime, but during the fourth quarter, Fabbi threw a touchdown pass to Anthony Carter (not pictured) for the winning points.

Anthony Fabbi (7) got a two-point conversion during the game.

KOOSKIA — A touchdown pass from Anthony Fabbi to Anthony Carter early in the fourth quarter of the rivalry game last Friday night, Oct. 22, was enough to put the Clearwater Valley football boys back in the state playoffs. A loss to visiting Kamiah likely would have pushed the Rams out of the statewide top-12 in the 1AD1 classification, which features 12 teams in postseason play seeded according to the relative power they’ve shown during the season.

Kamiah had carried a 12-8 lead into the fourth quarter, having taken the lead midway through the second quarter with a pass from Kendrick Wheeler to Brady Cox, who turned a fourth-and-five deep in Rams territory into a 23-yard catch-and-run. But as happened after Kamiah’s earlier score, the Rams stopped the ensuing two-point try.

After stopping CV’s opening drive, Kamiah had taken a 6-0 lead by way of a scoring throw from Wheeler to Cox on second-and-goal from CV’s 13. That was the 10th play of the Kubs’ first turn with the ball, as KHS had converted a third-and-one and a fourth-and-nine during that series. Wheeler ran for the short one, and got a screen pass out to Willis Williamson for the other.

The two conversions CV stopped ended up making all the difference in the final score.

The Rams struck back immediately after Kamiah’s first touchdown, breaking out from their own 15 and leveling it at 6-6 on a one-yard run by Dylan Pickering. For the conversion, CV kept it in Fabbi’s hands, and the quarterback race around the left end for an 8-6 lead with 4:11 left in the first quarter.

The weather — a rainy night typical of October nights at CVHS — suited both teams’ rushing attacks, which in turn kept the clock going. After CV’s touchdown late in the first quarter, Kamiah turned it over on downs, then CV handed it back on downs after losing standout receiver and defensive back Ridge Shown to injury. Then Kamiah turned it over on downs again, early in the second quarter, at the CV 36. The Rams went three-and-out, punting it out to midfield with 8:32 left in the first half. Kamiah turned that possession into a touchdown and the lead.

Kamiah recovered the ensuing kickoff in Rams territory and looked to have another touchdown — but that was called back on a penalty for an illegal block. Then a tackle in the backfield stopped a run play for a loss, and that, combined with a procedure penalty made it third-and-20 from the 35. Facing fourth-and-12 after a run, the Kubs threw incomplete, and after that shaky moment, CV stabilized.

The Kubs had several more chances to extend the lead, including another drive that started in CV territory right before halftime. After converting a third down with a pass from Wheeler to Cox, the Kubs blew a snap with 27 seconds left in the second quarter, which still left enough time for two more throws — but CV defended both.

KHS went three-and-out starting the third quarter, but the punt nearly turned into a disaster for the Rams. It was ruled down just outside CV’s end zone while Kubs supporters insisted a nearby CV player had touched it, which would have made a second special teams turnover. Instead, Pickering ran it out of trouble and the Rams punted it back out to midfield.

A holding penalty then flipped field position in the Rams’ favor, forcing Kamiah into a three-and-out. Fabbi broke a 45-yard run during the ensuing possession, but Kamiah forced and recovered a fumble with 3:06 left in the third.

The Rams’ passing defense then made the defensive play of the game. With KHS having advanced to their 35, CV freshman linebacker Jake Fabbi intercepted Wheelers’ throw, giving the Rams possession at their own 37.

CV then put together the 10-play offensive series that ended with Carter taking Anthony Fabbi’s pass right down the middle of the field to the end zone, having released wide open into the middle of the Kamiah secondary with 8:27 remaining in the game.

Kamiah’s counterattack ended in heartbreak after six plays, as the Kubs fumbled a complete pass into the end zone, where Anthony Fabbi recovered it with 6:29 to go.

CV bled the clock to less than two minutes before KHS forced a punt with a sack by Everett Skinner, but CV’s punt pinned them back at their own 12 and the hurry-up drill made no progress against the energized Rams.

Next, Clearwater Valley visits Lapwai at 7 p.m. Friday night, Oct. 29, where the Wildcats will try to defend their No. 6 seed against a Whitepine League familiar. Prairie, Genesee and Potlatch also qualified out of the WPL, making five North Central Idaho representatives in the 12-team playoff. Prairie holds the No. 4 seed and a bye into the quarterfinals, with Genesee (No. 9) to play Murtaugh at Weiser High School and Potlatch (No. 10) to play Grace at New Plymouth.