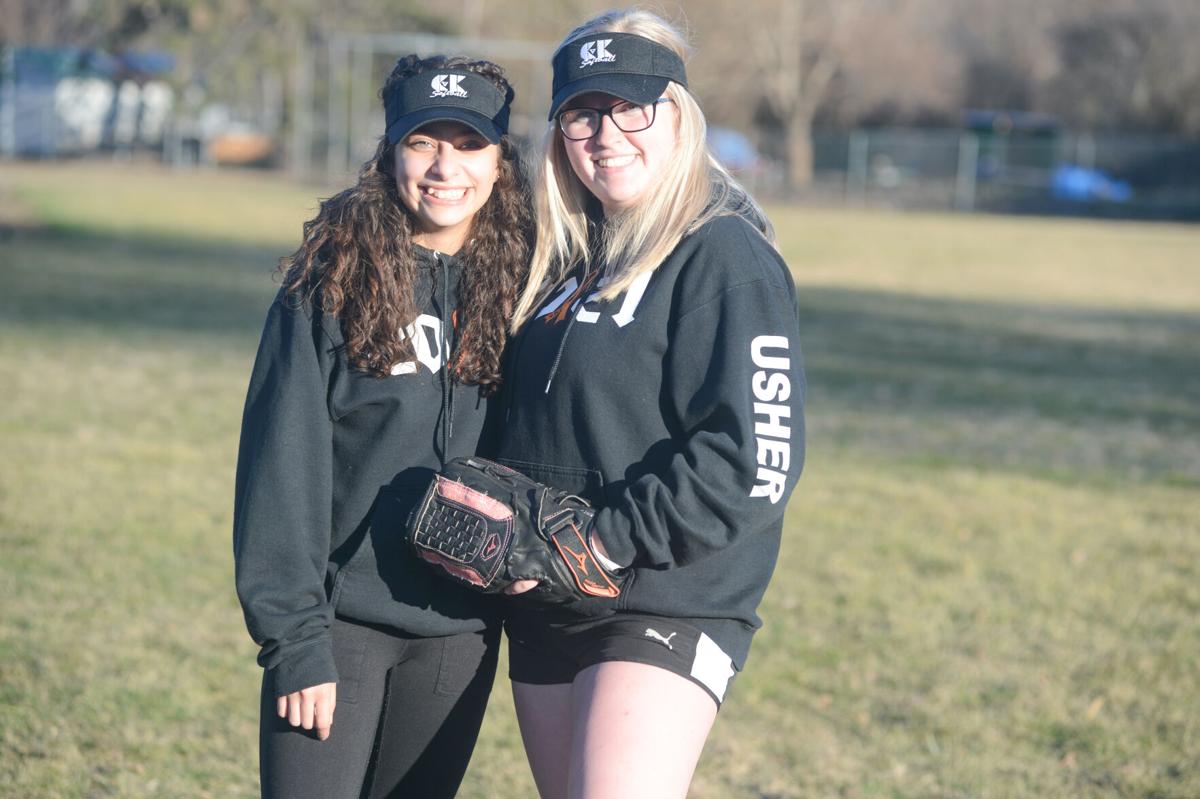 Kamiah seniors Yesica Gonzalez and Eboney Usher — who helped head the first KHS cheer squad in recent memory — are both out for softball this spring. On the diamond, they’re two of about 20 who are part of the cooperative Clearwater Valley and Kamiah have put together for this spring. Together, the CV/K softball girls will be competing in the Class 2A Central Idaho League and gunning for state qualification against the likes of Grangeville, St. Maries and Orofino. 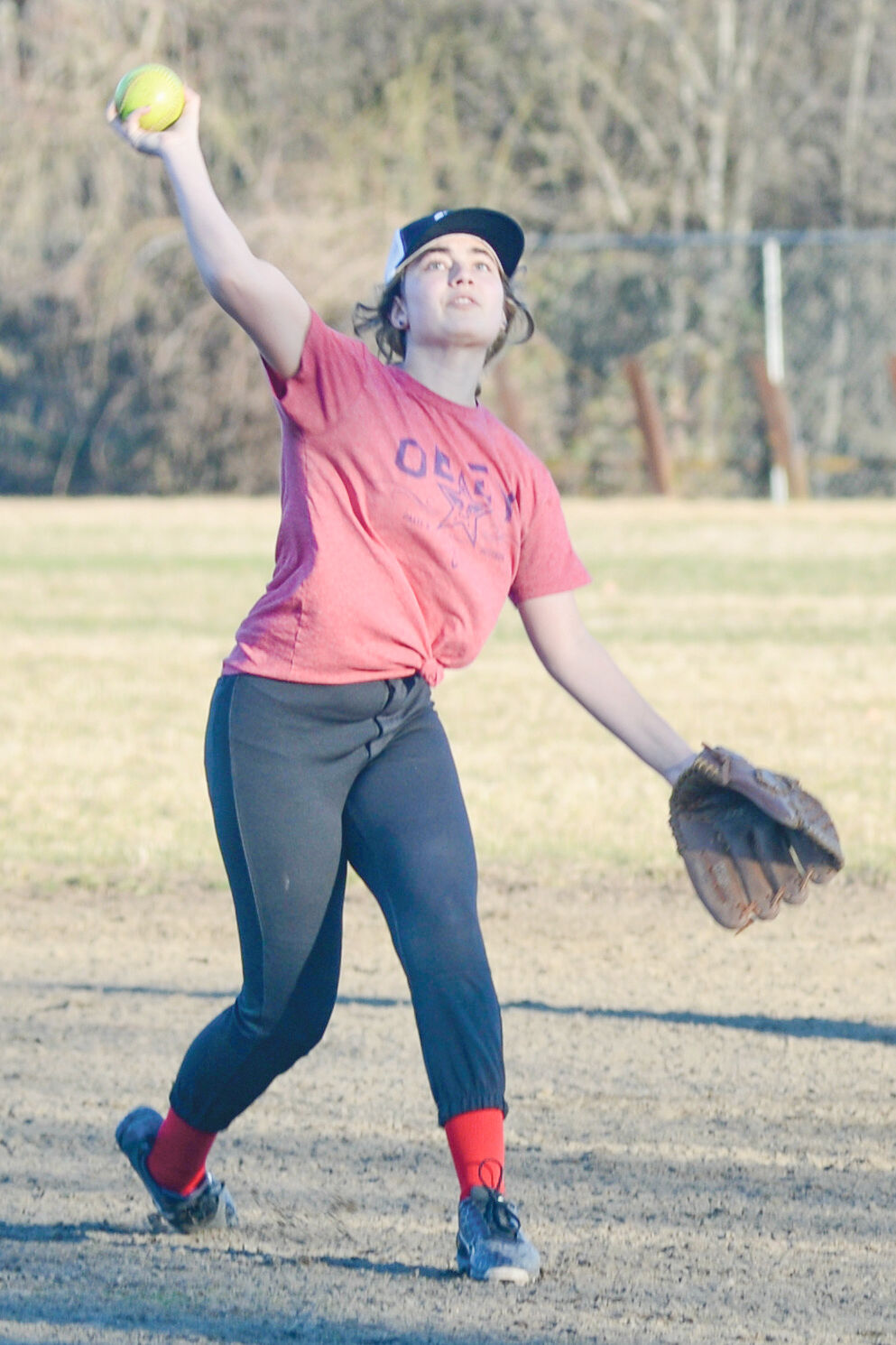 The CV/K softball co-op girls got in a good afternoon of practice Thursday afternoon, March 12.

Kamiah seniors Yesica Gonzalez and Eboney Usher — who helped head the first KHS cheer squad in recent memory — are both out for softball this spring. On the diamond, they’re two of about 20 who are part of the cooperative Clearwater Valley and Kamiah have put together for this spring. Together, the CV/K softball girls will be competing in the Class 2A Central Idaho League and gunning for state qualification against the likes of Grangeville, St. Maries and Orofino.

The CV/K softball co-op girls got in a good afternoon of practice Thursday afternoon, March 12.

KAMIAH — Ask Vincent Martinez about softball, and his eyes light up.

The longtime KYRO (Kooskia Youth Recreation Organization) softball organizer was ready to rock and roll as the CV/K softball co-op head coach last spring, before that season — and all the spring sports — got shut down due to covid. With the disease apparently in retreat, the 2021 spring sports are picking up, and the co-op is poised to host Potlatch on Saturday, March 20. Game time is noon at the KHS Bob Squires Sports Complex, where all their home games will be played.

Saturday softball canceled due to covid

“There’s a lot of opportunity for the girls this year,” Martinez said last week. “We’re talking about competing, not just in the league or at state, but with each other on this field here. Early in the season, we hope what they see in the paper will spark them and bring the best out of them because there’s competition at pretty much every position out here today. I’ve got to give credit to these girls out here, because they are a team. They see it as healthy competition, they’re not backbiting, they’re not dogging each other and they’re not trying to make excuses for their mistakes. They’re picking up other’s mistakes and uplifting each other. They know that they’re hunting for that starting position, but they’re also accepting one of the main ideas we want them to have, that we are one team and we win or lose together. And win or lose, we’re going to play with a smile.”

The rivalry between the schools runs deep, but Martinez sees the players making each other better.

The squad is composed of about 50/50 of players from each school. As a whole, the team is very young, with two seniors out to play — both of whom attend KHS. For Yesica Gonzalez, it’s her first season of softball, and for Eboney Usher, softball is her main sport. Both were out for the KHS cheer squad last season, which Kubs AD Leah York said was the first time in about 10 years Kamiah has had a wintertime cheer program.

“We’re still trying to find the right spot for Yesica,” Martinez said. “She came over from track and she has good speed, and for having never swung a bat or caught a ball before this year, she has some raw talent.”

She has been practicing in the outfield.

“Eboney is competing for play at third base, where she fields pretty good,” he said. “We’ve got a lot of freshmen and sophomores, and I would say one of the most experienced players we have is Kayleigh Tavernier, who is a junior out of Kooskia. She’s a lefty and we’re looking for her to hold down the fort over at first base. CV junior Angel Domínguez pencils as a pitcher and utility player with “a strong, fast arm.”

“We’re looking for her to play where we need her,” Martinez said. “She’s very adaptable, with a lot of experience coming out of the younger division.”

CV sophomore Macy Morrow suits up as catcher and “holds that pretty well,” Martinez said. But having missed last spring, none of youngest players on the team is “battle tested” at the high school level, Martinez said, and many of the 13 underclassmen out so far showed capability playing KYRO ball during their younger days. Those include Kamiah sophomores Audrey Gower, Bridget Breeding, Reese McMurtrie and Kaitlynn Everett and CV sophomores Autumn Knox, Cloie Spencer and Rayne Martinez.

Andrews, Davy and Breeding are contending at second base, while Martinez and Gower are competing at shortstop. The pitching group includes Ketola, Farnham, Dominguez and Martinez.

“I think the girls are meeting the challenge head-on,” Martinez said. “Some are a little bit slower-motivated and I wouldn’t want to make it sound all grandiose. But they are adaptable, and having gone through the covid shutdown last year, they’re hungry to play.”

Because of the covid kibosh last spring, this year will be something of a second first year at the high school level, having coached softball 10 years with KYRO. “Sports was an outlet for me,” he said. “Somebody paid it forward for me to play, and I wanted to pay it forward back. That’s how I got into coaching.”